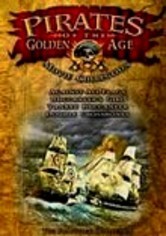 1951 NR 2h 42m DVD
There's action on the high seas with these two classic pirate adventures. In Double Crossbones, Dave Crandall's (Donald O'Connor) honor is besmirched when his honesty is called into question, and he seeks refuge on a pirate ship. Yankee Buccaneer follows Navy Cmdr. David Porter (Jeff Chandler) on a mission to capture seafaring raiders. With his ship disguised as a pirate vessel, Porter uncovers an international plot.