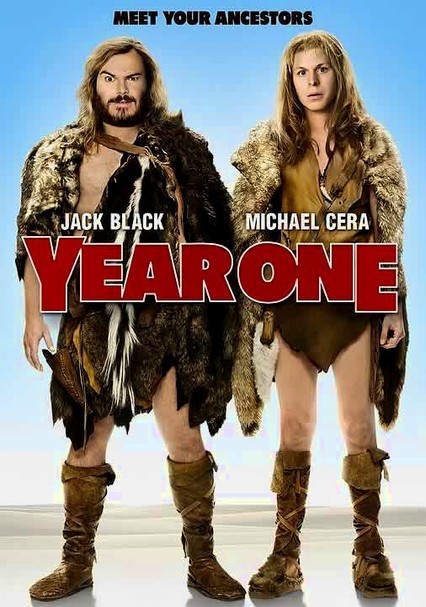 2009 UR 1h 37m Blu-ray / DVD
Cast out of his village after eating forbidden fruit from the tree of knowledge, oafish Neanderthal Zed and his sad-sack sidekick set off on an epic excursion through biblical times in this irreverent gagfest starring Jack Black.

Parents need to know that this farcical romp through the Book of Genesis -- which was originally rated R but got edited down to an edgy PG-13 -- is full of slapstick violence, crude sexual material, strong language (including "f--k"), and stereotypes. Since it stars Jack Black and Michael Cera, it's pretty clear that this isn't The Flintstones: There's lots of gross-out humor (bear feces are viewed up close, an obese hairy man gets an oil massage, a eunuch carries his removed testicles around in a small pouch, etc., etc.) and some fairly pointed mocking of the ideas and concepts of the Old Testament. Whether that adds up to ribald fun or offensive insults will depend on your perceptions.

Scuffling, mostly for comedic purposes. Cain repeatedly beats his brother Abel with a stone, a man is speared in the shoulder, virgins are hurled into a sacrificial flame (a high priest doused with oil also wanders a little too close...), characters are stoned in public, a woman is punched in the face, characters are attacked by a cougar and a snake, a soothsayer reads bloody entrails, characters are whipped, and prisoners are hung upside down.

Much of the movie mocks prehistoric/Old Testament-era attitudes about everything from worship to gender relations ("give her a little tap on the head -- women really respond to that"). It's clearly satirical, but it can be difficult to separate the satire from the depiction of questionable acts. There's also lots of potty humor (including one character eating feces and another peeing on his own face), extensive discussion of sex, violence, and some strong racial and gay stereotyping. It's all meant in fun, but it's regrettably not that funny.