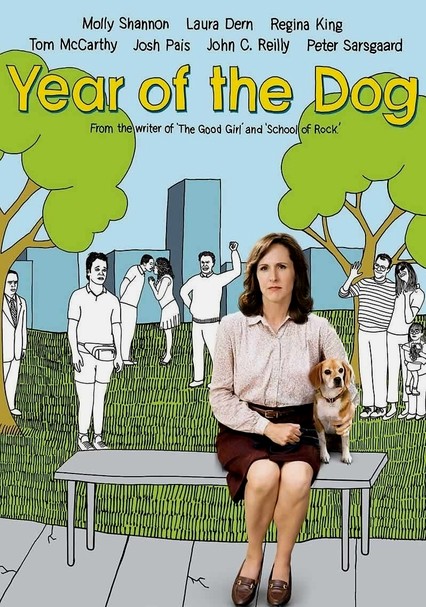 2007 PG-13 1h 37m DVD
Molly Shannon stars in this quirky, canine-themed comedy that centers on an upbeat secretary whose life takes a temporary nosedive when her beloved dog suddenly dies. But in an unexpected trick, her pet's tragedy opens her up to transformation.

Parents need to know that this dramedy chronicles a pet lover's transformation into a hardcore animal-rights activist. The film portrays veganism and animal adoption positively and casts a negative light on game hunting, wearing fur, and eating meat. Molly Shannon's character is socially awkward and incredibly lonely, so there are some tear-jerking scenes of her after her beloved dog's accidental death. Children who have pets and/or love animals may be disturbed by photographic images of animal cruelty, a wall of mounted stuffed animals, and three instances of pets dying.

A couple makes out loudly in front of Peggy. Layla wears low-cut tops. Peggy and Newt share an awkward kiss. Al's girlfriend does a sexy dance.

Images of animals used in lab tests are shown on a computer. Disturbing scenes of a dog near death and its owner's overwhelming grief. Off-screen, an aggressive dog kills a much smaller one, and viewers see another crying pet owner. A small child is told that pigs and chickens are murdered to be her food.

Peggy forges her boss' signature to donate funds to animal-rights charities but later apologizes. The heartbreak of losing her dog results in Peggy discovering her inner animal activist.

Peggy gets drunk on New Year's Eve (while babysitting) and has wine on a date. Layla suggests getting "wasted" and offers Peggy the anti-anxiety drug Xanax before taking it herself.