You Are There: America Grows Up 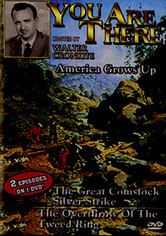 You Are There: America Grows Up

1953 NR 0h 50m DVD
Walter Cronkite's pronouncement "You are there" -- a witness to history's great moments -- greeted viewers of this popular TV series that ran from 1953-1957. Hosted by correspondents such as Charles Collingwood, the show investigated noteworthy historical events as though they were breaking news. This episode chronicles the downfall of New York City's corrupt political kingmaker William "Boss" Tweed and the Great Comstock Silver Strike.