You Are There: Jefferson Makes a Difference 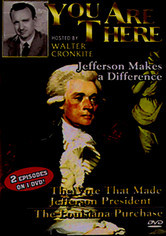 You Are There: Jefferson Makes a Difference

1953 NR 0h 50m DVD
Illustrious newsman Walter Cronkite's stentorian pronouncement "You are there" -- an armchair witness to history's great moments -- greeted viewers of this popular television series that aired from 1953-1957. Hosted by correspondents such as Charles Collingwood and Mike Wallace, the program investigated prominent historical events as though they were breaking news. This show centers on the two-term presidency of Thomas Jefferson.