You Move You Die 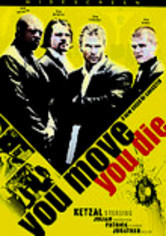 You Move You Die

2007 NR 1h 32m DVD
After the engagement ring he planned to give to his girlfriend, Emma (Ashleigh Ogden), is stolen, Mike (Ketzal Sterling) enlists his four best buddies for a high-powered mission to retrieve the ring in this black comedy from New Zealand. Delving into the underbelly of Auckland, the blokes don't hesitate to leave a trail of dead bodies in their wake. Sterling also wrote and directed the indie film, which takes place in real time.