You're Not Elected, Charlie Brown 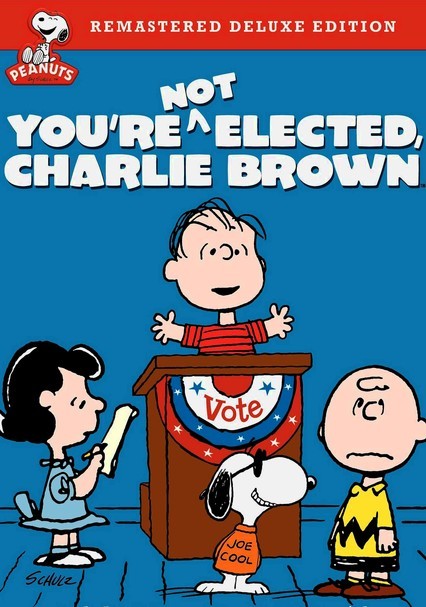 You're Not Elected, Charlie Brown

1972 NR 0h 25m DVD
The Peanuts gang takes on the electoral process in this 1972 television special. Charlie Brown's race to be class president falters when Linus takes the lead with Lucy as his hard-nosed campaign manager. Despite mentioning the Great Pumpkin in a speech, Linus is elected, however, the pressures of his office prove tougher than expected. No one listens to him, least of all the principal. Woodstock makes his first animated appearance in this show.

Parents need to know that You're Not Elected, Charlie Brown, written by Peanuts creator Charles Schulz in the early 1970s, highlights the perils and pitfalls of the election cycle that continue to be relevant. It's a mostly cynical view of politics, wrapped in the dependable humor and entertaining characters that make up the Peanuts gang. Neither pedantic nor silly, the DVD is a good choice for young kids interested in politics. The second feature is a 2006 short called He's a Bully, Charlie Brown. In this one, a mean kid misleads other kids into losing their marble collections, and he trips Snoopy and shoves him to the ground. When Charlie Brown sees what's happening, he behaves in ways that might be seen as out of character: He learns from a certain beagle named "Joe Cool" all about winning at marbles, stands up to the bully, and wins. Both features contain name-calling.

In the second feature, Snoopy is knocked over and shoved by a mean kid. In the titular feature, Lucy asks fellow students to vote for her brother, and if they don't immediately agree to this suggestion, she makes a mean face at them and makes a fist, scaring the students into saying they'll vote for Linus.

Classic Peanuts name-calling such as "blockhead." In the second feature, a bully thinks Snoopy is a boy and calls him "funny-looking" and "weird."

In the main story, subtle and not-so-subtle jabs are taken at the political process. Lucy bullies the school electorate to win votes for her brother, and each member of the campaign team appoints an assistant who has to do the real work. In the second feature, He's a Bully, Charlie Brown, the message is more overt -- a mean kid gets his comeuppance.

Based on the Peanuts comic strip, which has been used in extensive merchandising of toys, school supplies, and clothing featuring the characters.