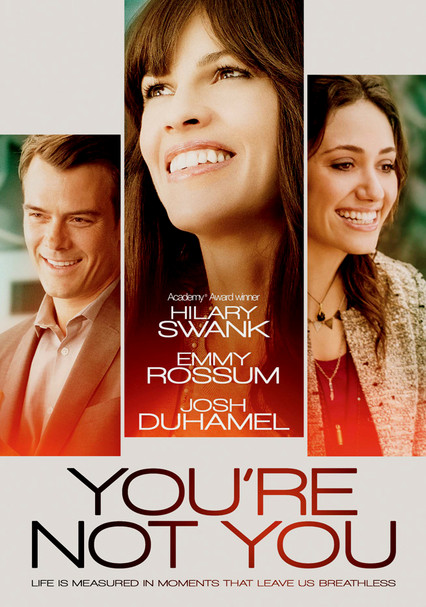 2014 NR 1h 42m DVD
Finding her life upended after being diagnosed with a fatal illness, classical pianist Kate inexplicably hires flighty college student Bec as a caregiver. Though they're polar opposites, they forge a bond -- which grows stronger as Kate deteriorates.

DramaMedical DramasDramas Based on the Book

Parents need to know that You're Not You is a frank description of the steady decline of a concert pianist named Kate (Hilary Swank) who's diagnosed with the fatal degenerative disease ALS when she's 35. The film depicts her and those around her in all their frailty and human failings as they struggle to cope with the devastation of her condition. Adults and children alike may find it difficult to watch Swank's expert portrayal of diminishing physical capacity, including incomprehensible speech and labored breathing. The movie addresses questions of invasive, life-prolonging procedures and how decisions about them should be made. Children 13 and younger will understand the issues but may find them too emotional to handle. Expect strong language ("f--k," "s--t," and more), scenes of implied sex (no nudity), drinking, and marijuana use.

A man and woman are shown in an obscured sex act; no nudity. Another scene depicts two clothed adults after implied sex. For one character, sex is unconnected to commitment, love, or affection. One character has sex with a stranger. Two characters have sex with people married to others.

The story is about a woman who dies from an incurable disease, but none of what she suffers is violent -- just sad and upsetting.

This is a sad but meaningful story about a devastating, incurable disease that strikes a young, talented woman. Her loved ones behave badly and then well as they cope with their grief, and she does her best to appreciate the life she's led and let go of what she can't control.

Characters are shown drinking; ALS patients and their friends are shown smoking marijuana.