You're a Good Sport, Charlie Brown 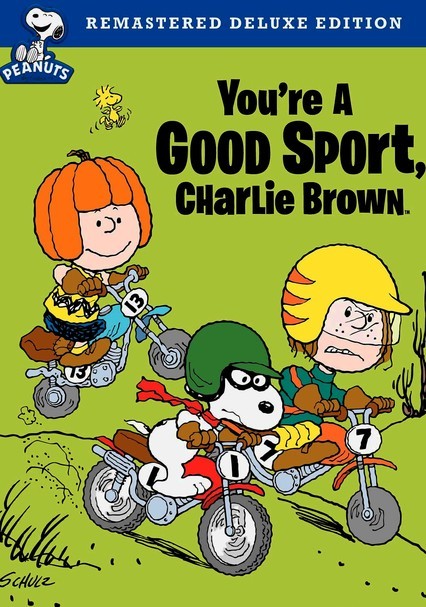 You're a Good Sport, Charlie Brown

1975 NR 0h 30m DVD
Charlie Brown, Snoopy and the gang gear up for a sports extravaganza in this classic Peanuts adventure featuring a tennis match, a motocross race -- and everyone's favorite round-headed kid clad in a custom-made pumpkin helmet. Snoopy isn't exactly a tennis pro, but as the motorcycle-riding Masked Marvel, he gives Chuck and Peppermint Patty a run for their money. Who will win the race and snag two tickets to the upcoming Pro Bowl?

Parents need to know that You're a Good Sport, Charlie Brown is a 1975 Emmy Award-winning Peanuts movie that is funny and entertaining and reinforces important lessons about trying your best even when the competition is intimidating. A bonus episode included on the DVD is also sports-focused. The story features a few historical sports references that may go over kids' heads -- including references to Bruce Jenner in the context of being a Gold-medal athlete instead of what Jenner is known for today -- but otherwise Charlie Brown's sporting efforts have stood the test of time. There is some mild bullying; Charlie Brown is frequently called "pumpkinhead," and Marcie is called "squirt" by an overly competitive and cocky kid from a rival school, but his actions are shown to be negative, especially in contrast to the good sportsmanship consistently on display from Charlie Brown and Peppermint Patty. Also, in a brief scene in a hospital, Snoopy is shown recuperating in bed while reading Playdog magazine.

A bully competing in the decathlon frequently calls his rivals "pumpkinhead" and "squirt."

Examples of poor and good sportsmanship provide plenty of reinforcement for the fact that it's how you play the game that matters. Grandstanding winners lose, and underdogs who focus and keep trying triumph.

In addition to the comic strip and the TV specials, Peanuts characters continue to sell merchandise from clothing to toys to school supplies.