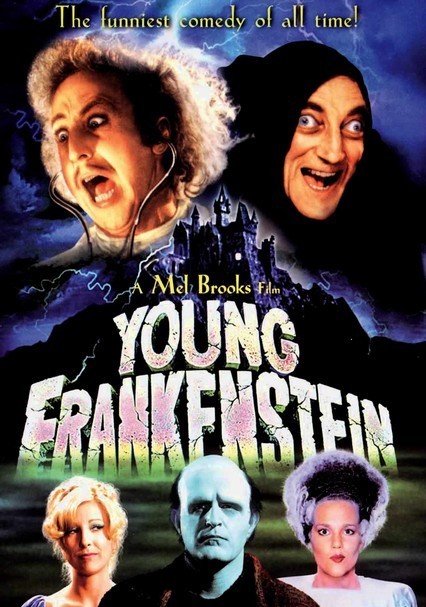 1974 PG 1h 46m Blu-ray / DVD
A laugh riot from beginning to end, this classic parody from director Mel Brooks stars Gene Wilder as Frederick Frankenstein, who detests his family history but ultimately can't resist the temptation to follow in his infamous grandfather's footsteps. Adding to the fun is a brilliant supporting cast that includes Marty Feldman as bug-eyed assistant Igor, Madeline Kahn as Frankenstein's frosty fiancée and Peter Boyle as the zipper-necked monster.

Parents need to know that Young Frankenstein is the 1974 Mel Brooks movie that parodies the timeless monster story. Like all of Mel Brooks' movies, there are plenty of sexual innuendo at work here--references to "a roll in the hay," to "knockers," and the use of a German word that clearly in the context of the scene means "penis." However, for all its humor, there is one scene in which Frankenstein's monster forces himself on Madeline Kahn's character in a way that could be interpreted as nonconsensual sex, even as it becomes consensual when she sees his penis and her pleasure is obvious when she starts to sing in an operatic voice. Also, there is some mld profanity on occasion. There is also some comedic pratfall violence--as well as a scene in which a man is choked to death.

Bawdy humor and sexual innuendo. In one scene Frankenstein's monster forces what is at first nonconsensual sex on one of the female characters that becomes consensual when she presumably sees the size of his penis. References to "a roll in the hay," as well as "knockers."

Some profanity: "Son of a b--ch." "S--t." "Bastard." "Godd-mn." A woman uses a German word that obviously translates to "penis." Sex jokes. Reference to a "roll in the hay." A joke based on the "bags" slang term for women.

Too parodic and over-the-top for any real positive messages.

Cigar and cigarette smoking. Wine drinking at dinner, no one acts intoxicated. A police officer makes reference to taking a "nip from the old bottle."