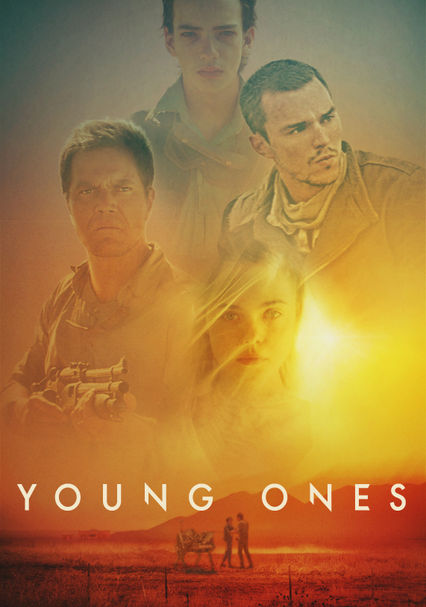 2014 R 1h 33m Blu-ray / DVD
As Earth withers in drought, farm owner Ernest defends his property and his children, Mary and Jerome, from the harsh frontier. But Mary's manipulative suitor plots to take Ernest's land for a devious scheme, and Jerome is forced to fight back.

Parents need to know that Young Ones is a revenge-driven, futuristic sci-fi movie set in a world where water is scarce. It's pretty violent; characters are shot and killed (blood spurts are shown), and one is killed with a rock to the head. A baby is sold on the black market, and characters fight and argue. Language includes several uses of "f--k" and a few uses of "s--t." Elle Fanning's character is pregnant, and she's seen kissing and showering with her boyfriend (nothing sensitive shown). One of the characters is said to have a drinking problem; he drinks hard liquor in a few scenes. Several other characters also drink heavily. Teen sci-fi fans will be interested, as will fans of the three younger stars -- Fanning, Nicholas Hoult, and Kodi Smit-McPhee.

A young woman is pregnant. She and her boyfriend take a shower together (close-up, nothing sensitive shown) and are shown kissing. Minor innuendo.

Characters are shot and killed, with blood splatters. One character is killed with a rock to the head; he lies bleeding for a while before dying. Some fighting and punching, and a knife is introduced into a fight. A donkey breaks its leg and must be shot (the break is shown, but the shot happens off screen). A baby is sold on the black market, and the baby's father is shot through the stomach, with a spurt of blood. General tension in the air, and characters argue frequently.

Mostly a story of victims, violence, and revenge. But the setting -- a future in which water is scarce -- is worth discussing. What would happen if water became scarce and the government started controlling it?

The father is referred to as someone with a drinking problem. In a few scenes, he falls off the wagon and drinks hard liquor from a bottle. He delivers several bottles to the water workers, who also like to sit and drink and get drunk.