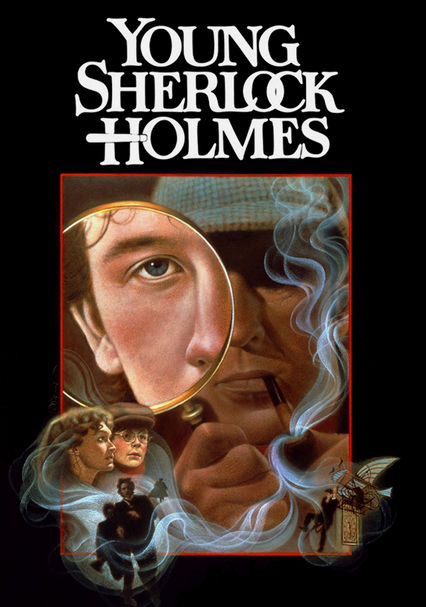 1985 PG-13 1h 48m DVD
With the ever-present Watson by his side, future detective genius Sherlock Holmes embarks on an exciting adventure as he attempts to unravel a series of mysterious deaths near the campus of the prestigious Brompton Academy.

Parents need to know that perils in this young-adult Sherlock Holmes drama include threats of the heroine being sacrificially turned into an Egyptian-style mummy, and kids being strangled and run through with swords. There's some potential nightmare imagery for young viewers -- scenes of demonic entities and rotting zombies; it's made clear that these are only hallucinations, but the chills are still vividly rendered. Young Watson tries tobacco smoking.

More PG than PG-13. One fatal shooting. Characters "mummified" non-explicitly by hot wax. Mild wounds from sword-thrusts. Hand-to-hand fighting, strangulation. Bloodless, hallucination-inspired mayhem and death include one character who stabs himself in the chest, another getting run over by a carriage, another besieged by rotting skeletons, another imagining little monsters pecking and biting at him.

"Hell" and "damn," just about one time each.

Holmes is ever polite and fearless seeker of justice (even though it harmed his own family; only the sketchiest details given). He and Watson (who overeats and tries to smoke a pipe) are shown to be consistently smarter than the adults, who are either oblivious (especially Lestrade of Scotland Yard) or treacherous villains in disguise. The "exotic" depiction of Arab-Egyptian culture (emphasis on the "cult" part) is pretty cartoony.

Pipe-smoking by the young Watson and Holmes. Social drinking (but not by underage characters).