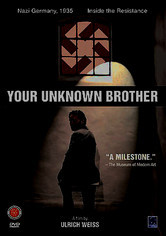 1982 NR 1h 45m DVD
Anti-fascist film projectionist Arnold Clausen (Uwe Kockisch) tries to lead a quiet life in 1935 Nazi Germany after he's released from a Hamburg prison camp. While grappling with his nation's political climate, he reluctantly befriends a member of the underground (Michael Gwisdek). But when Clausen's confederates start going to lockup, he suspects that his new comrade is an informant in this first-rate psychological drama.