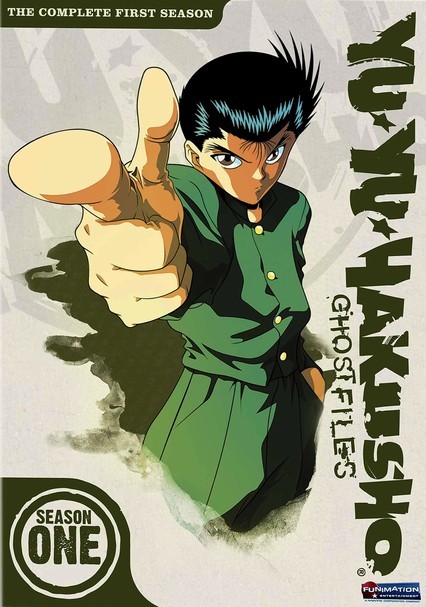 1992 TV-PG 4 discs
Yusuke Urameshi, a 14-year-old delinquent, dies while saving another and is granted astounding new powers to be used for good in this Japanese manga series. Now, he is in the Spirit World existing as a Spirit Detective who tracks down evil. Season 1 follows Yusuke's adventures, such as saving the girl he loves most, Keiko, from a fire in "Requirements for Lovers" and battling a thief who's taken her hostage in "The Three Eyes of Hiei."

Parents need to know that Yu Yu Hakusho is a high quality anime that is available in milder edited formats and edgier, original formats. The unedited versions include more intense violence, more sexual humor, and stronger language. The edited versions are likely appropriate for kids 8 and older, while the unedited versions are more appropriate for teens. In either case, violence is ever-present and can occasionally be brutal and include blood or gore. A few adults drink and/or smoke frequently, with one parent seeming to abuse alcohol.

Lots of romantic tension between Yusuke and his love interest Keiko, which leads to a few kissing scenes. In the beginning, Yusuke teases Keiko about her breast size and even looks up her skirt to tease her. Another character, Kuwabara, develops a crush on another member of the supporting cast, Yukina, but it never gets beyond hand holding.

There is a lot of supernatural animated violence, which can get pretty graphic. The main characters confront enemies by punching, stabbing, supernatural attacks (which can lead to disintegration), decapitations, amputation, and explosions. There is also a fair amount of animated gore during fights.

There is a fair amount of language in both the Japanese and English dub. Unedited versions include: "bitch", "crap", "damn", "hell", "s--t", and "ass."

The concept of death is portrayed as the next step in life and not something to be feared. Also people who behave poorly might not be as bad as they seem. True strength can only be achieved through hard work and perseverance.

There is a moderate amount of merchandise available for this series including DVDs, posters, and action figures.

Some of the adult characters are shown both drinking and smoking quite a bit. Yusuke's mother, Atsuko, drinks entire bottles of alcohol, goes out to bars, and gets drunk. Kuwabara's sister is almost always shown with a lit cigarette in her mouth. These behaviors are never portrayed in a positive light, but are integral parts of their characters or are used for comedy.