Yucko the Clown: The Damn Show 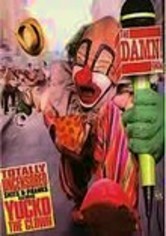 Yucko the Clown: The Damn Show

2006 NR 1h 30m DVD
Yucko the Clown (Roger Black), a foulmouthed prankster who's featured often on Howard Stern's radio show, lets loose with a torrent of politically incorrect insults in this collection of skits, impromptu interviews and cartoon shorts that are sure to leave you speechless. With floppy shoes, a big red nose and an electric-green wig, he's got the traditional clown look. But his X-rated antics are something you've never seen before.