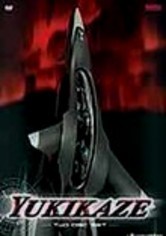 2002 NR 0h 45m DVD
The third volume of this popular anime finds Lt. Rei Fukai and his advanced fighter jet, the Yukikaze, in another dimension, working overtime to fool aliens into falling for a holographic decoy. But with the alien force known as the JAM standing between Fukai's Fairy Air Force and his portal home, chances are slim that he'll ever see Earth again. Extras include interviews with director Masahiko Ohkura and voice actors Steve Staley and Dan Woren.