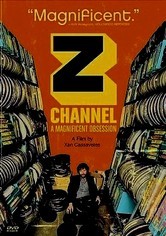 2004 NR 2h 0m DVD
Founded in 1974 and based in Los Angeles, the Z Channel was the nation's first pay-cable station, preceding HBO or Showtime. At its pinnacle in the early 1980s, it served only 100,000 viewers, but nonetheless inspired and influenced the movie industry with its eclectic fare, securing a unique place in film history. IFC Films and director Xan Cassavetes celebrate the Z Channel and its founder, Jerry Harvey, with this captivating documentary.