Zaman: The Man from the Reeds 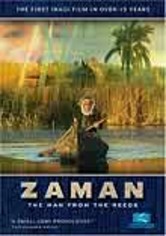 Zaman: The Man from the Reeds

2003 NR 1h 17m DVD
As President Bush awaits Congress's approval to invade Iraq, an elderly Iraqi man, Zaman (Sami Kaftan), leaves his peaceful rural home and heads for bustling Baghdad to buy medicine after his wife becomes ill. News of the impending war swirls about as Zaman hits one roadblock after another trying to get the medicine, but he never loses sight of his important mission. Amer Alwan's poignant story was filmed entirely in Iraq.