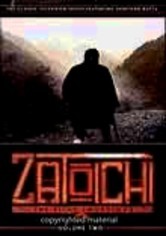 1974 NR 2 discs
The incomparable Shintaro Katsu stars as the title character of this long-running samurai television series, following the martial arts adventures of a blind swordsman who refuses to let his handicap get in the way of doling out a good beating. This collection of episodes -- the second in a multivolume set -- includes "Pouring Rain," "A Bird Lands on Ichi," "An Unforgettable Flower" and "The Two Zatoichis."