Ziggy Stardust and the Spiders from Mars: The Motion Picture 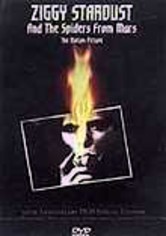 Ziggy Stardust and the Spiders from Mars: The Motion Picture

1973 PG 1h 29m DVD
During the 1970s, British glam rocker David Bowie's gender-bending style had a huge impact on popular culture. Widely known for his unique rock-and-roll characters and alter egos, Bowie put on a legendary live show. Director D.A. Pennebaker captures Bowie's most famous character -- Ziggy Stardust, the rock star from Mars -- as he performs for the last time. At the time, many thought this 1973 London show would be Bowie's swan song as well.