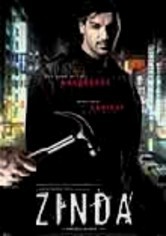 2005 NR 2h 0m DVD
Imprisoned by an unknown enemy in a room with no exits, Bala (Sanjay Dutt) clings to his humanity by revisiting memories of his beautiful wife, Nisha (Celina Jaitley). He also learns how to fight so that he might one day seek his revenge. Even more maddening than not knowing where he is -- or why he's there -- are the mere four days of freedom he gets after 14 years in captivity. Will he ever be truly &NFizinda&NFi_; (alive) again?