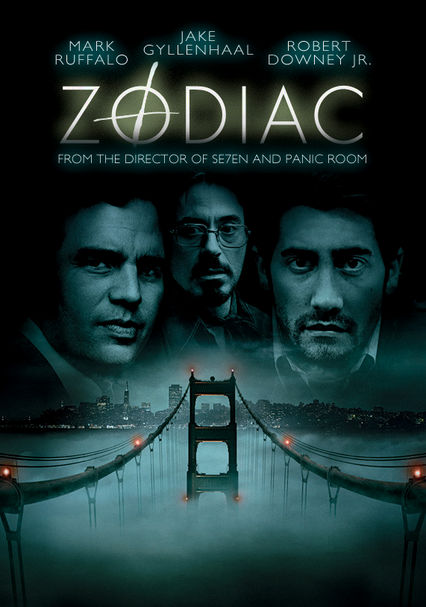 2007 R 2h 37m Blu-ray / DVD
Based on events in the 1960s and '70s, this chilling drama recounts the actions of a killer who stalked the streets of San Francisco and left clues in the newspaper, relating the mystery through a cartoonist who became obsessed with the case.

Parents need to know that this three-hour movie about the investigation into a string of real-life serial murders during the early 1970s is too violent and disturbing for most teens (and probably even some adults). While some violence takes place off screen, what does appear is brutal and bloody: The Zodiac shoots a couple in their car, stabs another couple in the back (the victims' pained, horrified faces are shown both times), and shoots a cabbie. Police officers and reporters discuss the deaths in some detail. Characters drink heavily and smoke frequently (one also uses hard drugs). References are made to the killer's "latent homosexuality" and a suspect's pedophilia. Language includes repeated uses of "f--k."

Suggestion of sexual desire as first victims "park" (they're shot before they even kiss); Paul reports that the killer is a "latent homosexual."

Repeated profanity, especially "f--k," as well as "s--t," "hell," "goddamn it," and other colorful language ("Sweet mother of Christ," "Jesus on crutches," "Tell him to screw," "crap," "getting your rocks off with a girl") and name-calling ("shorty" and "retard").

Serial killer is cruel and plainly deranged; cops and reporters argue amongst themselves and become obsessed with the case to the point of ruining their home lives. Paul gives his editor the finger.

Some references by name (Folgers, the movie Bullitt), plus background imagery (Coca-Cola and Campbell's soup in vending machines, Slinky on TV); Dirty Harry on movie screen.

Drinking to drunkenness in bars (Paul and Robert favor blue drinks called "Aqua Velvas"); more drinking at Belli's Christmas party (he offers a "toddy"); frequent cigarette smoking; Paul looks high/wasted at work -- he snorts cocaine and keeps a full bar and other drugs in his home.