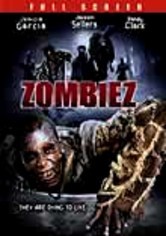 2004 NR 1h 32m DVD
Out of nowhere, a young woman named Joe (Jenicia Garcia) suddenly finds herself besieged by a monstrous zombie onslaught. In a desperate quest to save her husband, she has to find a way to fend off countless undead flesh-eaters traipsing all over New Jersey. Her hopes begin to fade, though, as her friend die one by one -- and the clock winds down in this low-budget, urban gore-a-thon written and directed by John Bacchus.