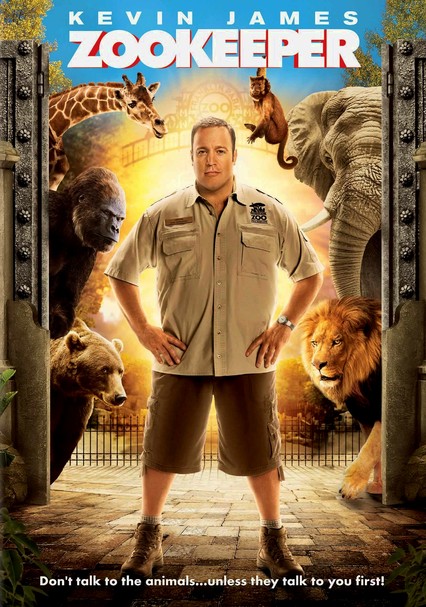 2011 PG 1h 42m Blu-ray / DVD
When an unlucky-in-love zookeeper tells his romantic troubles to a giraffe, a monkey, a lion and other animals in the zoo, the critters speak up and advise him how to win the heart of the beautiful woman who got away. But will their advice work?

Parents need to know that this PG-rated Kevin James comedy deals with some grown-up issues about dating and mating that may not interest young kids. The humor, while featuring the predictable amount of animal "poop" and "pee" talk, is largely aimed at older audiences and includes some double entendres about sexual relationships -- marking territory, being forceful, highlighting your genitalia, and other jokes. Language includes words like "idiot," "crap," "shut up," and some scatological terms. Ultimately, the titular zookeeper learns a worthy lesson about just being himself, but by then kids will already have seen him act foolishly for an hour and a half.

The entire plot revolves around Griffin trying to win his ex's heart, and she's depicted as gorgeous, often wearing sexy dresses and outfits. Jokes are made about a bride's "flexibility," and a man boasts about how often he and his girlfriend "made out, hard." Some of the animals make double-meaning jokes about how to mate (show her the "goods," thrust out your loins, "take her down," "she had this extra claw and knew how to use it"). Griffin kisses two different women in the film. A Latin-style ballroom dance is rather spicy.

For most of the movie, the only violence is Griffin's nearly incessant pratfalls (as well as gags in which others also humorously fall). He gets poked twice by a porcupine quill and falls into a pit between two animal enclosures. There's a bicycle race between him and his antagonist (they both get hurt, but it's more comic than violent). The gorilla, Bernie, tells James that another zookeeper was cruel to him. Griffin hits the other zookeeper so hard that he breaks the plaster in the wall.

Even though the movie's overarching message is positive -- that someone should love you for who you are, not who you might become if you nag them enough -- there are many mixed signals about what constitutes someone's worthiness as a mate until the very end. Stephanie is portrayed as beautiful but mean and shallow, yet she's the one that Griffin is interested in for the majority of the film. Meanwhile, he acts surprised that Karen, a colleague, is actually attractive and treats her quite poorly until the end. So is the lesson that men are clueless and until they have an epiphany will reject a beautiful, intelligent woman if someone else is even more beautiful but mean?

Griffin's brother owns an exotic car dealership that sells Ferrari, Mercedes, Ducati, and other luxury vehicle brands. Other product placements include Red Bull, TGI Friday's (which is the location of a key scene), and Benihana.

Several scenes are at wedding-related events -- engagement party, rehearsal dinner, and wedding reception -- where adults are shown drinking. There's also drinking at the TGI Friday's. Sabrina, The Teenage Witch is shown on TV (which isn't coincidental, since the movie was co-written by the actor who voiced Salem the talking cat).