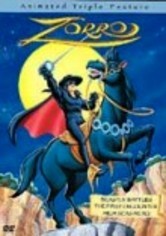 1997 NR 2h 18m DVD
Catch the swashbuckler in this collection of cartoon exploits, each featuring two episodes. In First Encounter, Zorro's friend Isabela discovers Zorro's true identity in "To Catch a Fox," and Zorro fights a bounty hunter in "The Enforcer." Beastly Battles has Zorro looking for stolen treasure in "Sting of the Serpent" and for an antidote in "The Beast Within." High Seas Hero includes the episodes "The Pirates of San Pedro" and "A King's Ransom."