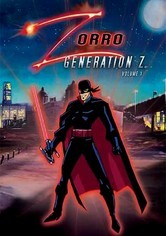 2008 NR 2h 12m DVD
Follow the brand-new animated adventures of Diego de la Vega, a 21st-century teen who takes up the cause of his Zorro forebears with a little help from a few modern conveniences, such as his multipurpose laser-sword and his motorbike, the Tornado-Z. Together with his lovely pal and fellow crime fighter the Scarlet Whip, this young Zorro champions the underdog while fighting crime and corruption in his ancestral home of Pueblo Grande.