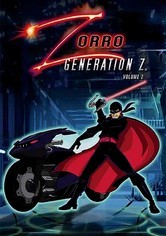 2008 NR 1h 50m DVD
One of history's finest heroes is reborn for a new century in this high-octane animated series. Today's Zorro rides the turbo-charged Tornado-Z motorcycle into action, wielding high-tech gadgets along the way. Accompanied by the alluring Scarlet Whip, Zorro follows in his family's footsteps as a bold avenger in a dangerous world. This volume includes Zorro's fox hunt, hostile takeovers and adventures into the underground.