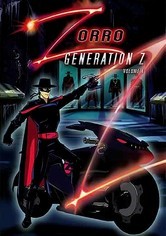 2008 NR 1h 50m DVD
A Zorro for the modern age, this futuristic version of the story follows the adventures of young Diego De La Vega, descendant of the original crime fighter, as he picks up the mantle, puts on the mask, and fights for justice in Pueblo Grande. Armed with his multipurpose, laser-powered Z Weapon and riding his trusty mechanized steed, Tornado-Z, this new Zorro faces many enemies, including the corrupt mayor of Pueblo Grande and his henchmen.